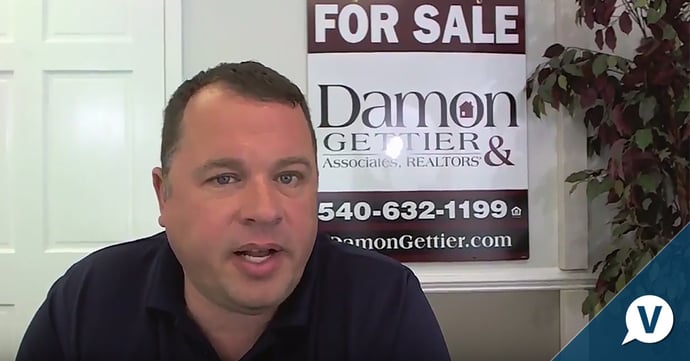 Press play to listen to the full success story:

"Just the other month we sent out one of the messages recommended by Vyral Marketing and generated 34 listing leads. We followed up on those leads and took 14 listings. That is just incredible. This was on the foundation of the two educational videos a month keeping us in front of our database as the local "go-to" experts. I bought $12,000 of video equipment before Vyral and never used it. With the HD webcam and mic they gave me instead, I look and sound amazing. They hold me accountable with the videos so they just get DONE. The ROI to date has been way beyond 10x, and the more I follow the program, the faster I get that necessary ROI in my bank account." 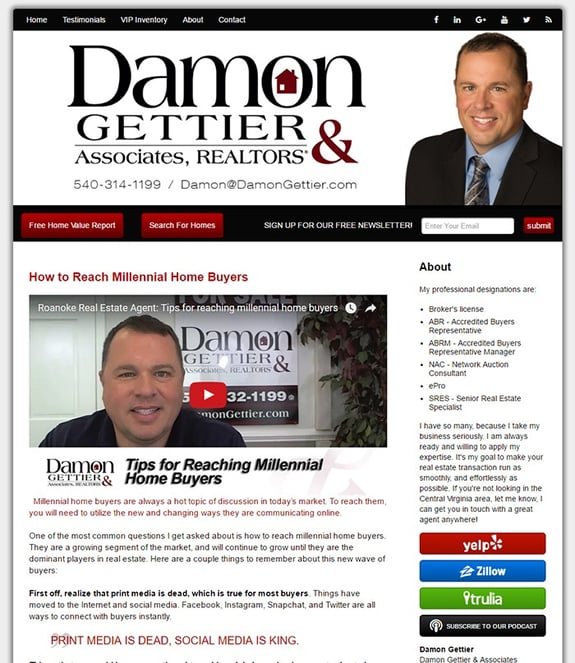 John: Leah tells me you've had some success on the program. Can you tell me about the results you've seen here?

Damon: It's two different sets. We do the Vyral Marketing, I guess for the branding more than anything and to get buyers. We've done fairly well with the buyers, but we've actually done better on the listing side, which isn't really what I expected. We sent out a letter that Frank wrote two months ago, and we had 34 listing leads from it and we listed 14 of them. It was a phenomenal letter. It was so good I never even read it. You guys always call me and ask me to review the material, but I say just to send it. You can perfect something to death, but a perfect plan never executed is not as good as a half-ass plan well executed. That letter had 14 listings from it.

Then, just last week, we sold two listings from that campaign. I think the total commission was $24,000? That pays for Vyral for the next four or five years. Don't hold it against me, but we don't even call the open-and-click reports; we need to, but I just don't have someone to do it and I don't have time to. We just send the video and send the email and see what happens. The second listing email he did, maybe a week or two ago, we only listed two from. Part of that is time of year, and part of that is I think the first one was just a more kick-ass email. So, I'm probably just going to have you guys send that one again because I'm sure the people who didn't read it will get the same message.

John: Well, what we do is - we usually come up with a new one every quarter. It's seasonal. The next one we do will be a winter one. We take those, and we use up-to-date market statistics and put a new spin on it for each season. So, we'll send one of those out every three months or so. Remind me - were you a client who left, but then came back?

Damon: I was a little anal. I didn't like the sound quality or the video quality, so I quit. I don't know what happened; I think I talked to Frank, and I told him that I didn't like the sound quality or video quality, and he said, "Why didn't you say something?" So, he told me the camera to get. It cost me about $100 or so, and then I got a new mic, the Yeti Blue Mic, and some Cowboy Lights. I put about $300 into the whole setup. It's a whole lot better quality too - it's something I want my name on. It took me and Leah a little while to get it set up on the computer, but once it was set up, I got the video and sound quality to where I want, and we send it out.

John: So it was just a matter of reengaging with Frank and getting some of those tips from him?

Damon: I decided to rehire you guys because, in my business every year, I sell a couple hundred houses a year and do very little sphere of influence. I feel once I've sold a house and done a good job, that's all I need to do. I didn't do anything to engage them and keep the referrals coming. I needed to do something. Lars told me I was a fool, so I called Frank and told me all I had to do was ask. I probably could have shortcut the system and made some more money if I had just asked.

John: Was there any thought of doing the videos yourself?

Damon: Absolutely. I went out and spent $4,000 on a Panasonic H1000 4K camera. It's sitting right here in my office looking at me. I spent almost another $5,000 on a Canon Mark 3 camera with lenses. With just those two cameras and lenses, it probably cost me $12,000, but I never once did it myself.

John: Why do you think that is?

Damon: Time and delivery method. If I had the time to shoot and edit it, I would still have to figure out a way to deliver it - and that just takes time. Someone told me the other day that they didn't have the time to do Vyral, and I was like, "What the hell are you talking about?" Leah gets on the phone with me and we knock out 8 videos, four months worth of videos at once. It takes about an hour, tops.

John: We have a lot of clients who struggle with this. Are you just kind of shooting from the hip? Does Leah give you the information beforehand or do you just wing it?

Damon: You could say that. Leah sends me a list of topics, I don't open the email. Then she calls me, and then I usually do have my stuff set up for her - my lights, camera, and mic. Then she asks whether I've seen the list of topics, I look at it, and tell her we'll just go from the top. It doesn't matter - I just start at the top and go - I've been doing this for 12 years, I know what the hell is going on.

John: You're happy with the content we're picking out for you?

John: And then you just kind of say, "Okay, this is it, let's talk about this for a few minutes and move on to the next one"?

Damon: Yeah, and we rarely do a retake either. I'm a real person who makes mistakes, and I think the consumer wants to see that - they want to see that I'm a real person sitting down talking to them. Like I said, you can perfect something and never send it, and it will never earn you any ROI.

John: With the core program, with just the videos, what kind of feedback do you get from you database?

Damon: I don't know, 14 listings. Honestly, I'm not a touchy feely person - I don't like talking to people, hugging people - I like selling houses. I get some feedback. I had an appraiser who gave me hell about one of them. From the consumers, I don't really get any feedback - just calls to come and sell houses.

John: What would you say your favorite part is about working with Vyral

Damon: Leah, she doesn't waste my time. We just go in and knock it out.

John: What would you say about someone who is on the fence about hiring us?

John: Any tips you would offer someone who wants to be successful on theprogram?

Damon: Don't overthink it. Answer the phone call when your coach calls. Have your mic and camera set up, make the call, and just knock it out. Tell your coach you want to do 6-8 at a time. If you do that, you only need to have four calls a year. You know? Anyone that says they don't have time - that's just a lie.

John: I really want you to start calling your opens and clicks. Just think of the ROI you would get if you started doing that.

Damon: It's just a time thing. My opens sometimes are four thousand. It's a massive database.